In 2014, the Deutsche Vermögensberatung – which is now being run by a 2nd generation of owners – celebrated its 40th anniversary. Among other things, the corporate museum shows how the DVAG has developed into what it is today, detailing the story of its success. The museum was a success in terms of visitor attendance since its opening in 2011. The exhibition space which introduces visitors to the company has recently been reorganised.

The exhibition space on the ground floor deals with the founding of the company, as well as how the founders’ sons have consistently and carefully carried on their parents’ life work. Visitors to the exhibition can experience the DVAG’s company values, learn how it has evolved and gone from strength to strength, through multimedia. The main target group is young potential professionals who are looking to gain extensive information on the DVAG and immerse themselves into the world of the company.

Katharina Knoll, who has been overseeing the exhibition areas at the Zentrum für Vermögensberatung from the very beginning in a curatorial as well as organisational role, was entrusted with leading the reorganisation, which opened in April 2019. TRIAD, a renowned creative agency with offices in Berlin, is responsible for the design concept. 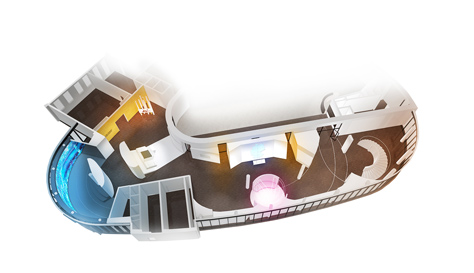